Insights from an expert: The Government Regulatory Technology Report 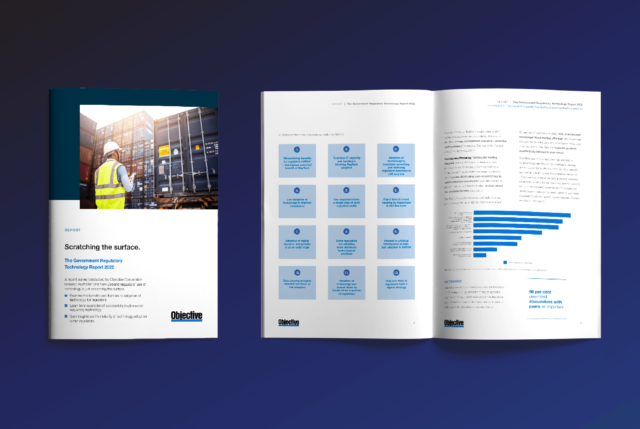 Insights from an expert: The Government Regulatory Technology Report

Simon Corden, Public Policy Consultant, was kind enough to present at our recent webinar where we unpacked the findings of our industry-first Government Regulatory Technology Survey. The insights and real-world examples from Simon were so thought-provoking that we felt it would be remiss of us not to collate and share them.

Why we launched this survey

The industry-first Government Regulatory Technology Survey was launched by Objective Corporation in response to a lack of a system-wide view of Australian and New Zealand regulators’ adoption of technology.

The survey found that currently regulators’ use of digital technology to improve outcomes, that is RegTech, is just scratching the surface.

The survey confirms that there are lots of exciting and innovative uses of various forms of technology being used by regulators. But overall, at this stage, many more regulators are at the stage of planning and considering, or trialling and partially deploying the various technologies than have them fully deployed.

The focus of the survey was on the key benefits, the barriers and maturity of regulatory technology adoption.

We asked about the adoption of 29 different regulatory technologies. This encompassed the deployment of digital systems within regulators including:

There are a lot of case studies published about many exciting regulatory technologies – but what we haven’t known was how frequently these tools were being deployed, trialled, or under consideration.

They were pretty evenly spread between State and Territory, Australian and New Zealand Governments, so provide a good snapshot of the state of play.

Various types of RegTech offer different benefits. Some assist those who are regulated, some help consumers, and some mainly support regulators. So, we sought to understand what are the key benefits agencies are seeking to capture from implementation of RegTech.

We outlined ten potential benefits from adopting RegTech and asked regulators to rank them.

‘Streamlining benefits for regulated entities’ was ranked in the top three potential benefits of two thirds of regulators, reflecting the potentially important role that RegTech is seen to play in making it easier for those we regulate to comply.

The next two highest benefits of RegTech were:

Using RegTech to streamline permitting processes is something that transformed our lives over the last two years. We displayed our vaccination certificates that had been automatically uploaded to Medicare and then our State-based app, and then used a QR code to check-in everywhere we went. And the Service agencies have done an amazing job supporting a rapid deployment.

But more broadly, the survey showed that adoption of technology to transform permitting and licensing regulatory functions still has a long way to go.

Web-based portals or mobile apps for permitting is seen as highly relevant, but to date, 25 per cent reported that they had fully deployed this. But more encouragingly 44 per cent are trialling or partially deploying these systems.

A single view of each regulated entity

Virtually every regulator now aspires to be risk-based, which often means targeting compliance and enforcement activity is informed by a holistic understanding of the entities being regulated.

And while 90 per cent believe an integrated licensing and investigation system is relevant to their agency, currently only 18 per cent have a single view of each regulated entity. And when I have discussed this with my fellow regulators, the sense is that this progress is disappointing but not surprising. With separate legacy systems, it is hard.

Almost everyone considered data sharing across agencies and/or jurisdictions as relevant to their activities. Many of us have seen powerful examples of where sharing data has supported both triggering voluntary compliance or informed enforcement activity.

When I changed my address on my driver’s license a year ago, it seemed that the State Revenue Office and the Victorian Electoral Commission were right onto it.

However, based on our survey, only 14 per cent of regulators are currently sharing data.

But I thought RegTech was all about artificial intelligence, and drones I hear you say.

Well, there are lots of innovative RegTech implementations of AI.

A year or so ago, I heard about an innovative use of artificial intelligence by Anne Lenz’s team at Brisbane City Council. They were using this technology to log the times that disruptive dogs barked on remote sound recordings they collected rather than review them manually. If your next door neighbour has a frequently barking dog, you know how useful collecting that evidence could be.

And more broadly, regulators are increasingly needing to manage and analyse large and complex data sets, so this technology is highly relevant.

Yet currently only 2 per cent have fully deployed these emerging technologies.

Only one third of agencies have a digital strategy

We also asked about digital strategies, noting that governments across Australia and New Zealand have made it a priority to improve their use of digital tools as outlined in whole-of-government strategies.

I was surprised that currently only one third of those who responded were aware of the existence of a documented strategy within their agency to guide how they better use technology to achieve their regulatory objectives.

IT capacity and capability

So, what is holding back progress?

We regulators need to be smart buyers and smart at implementation. But more than two thirds of respondents say IT capacity and capability is a barrier, along with the perennial issue of funding.

Lack of awareness of market offerings was also frequently cited as a barrier, and that is where industry or sector groups like the RegTech Association, G-Reg in New Zealand, or Australia’s National Regulators’ Community of Practice have a role to play.

Generally, it would be fair to say that most, but clearly not all, regulators’ use of technology is just scratching the surface. I will finish with four summary points.

Firstly, regulators recognise there are benefits from increased adoption of various forms of RegTech for both the regulator seeking to achieve better outcomes and regulated entities seeking an easier way to comply.

Secondly, regulators are embracing more sophisticated risk-based, intelligence-led approaches but not all have the foundational IT systems to collect, collate and analyse information.

Finally, this survey has highlighted the opportunities ahead and the appetite for more collaboration across the sector.

Download the report now for full details and a look into all 12 key findings.